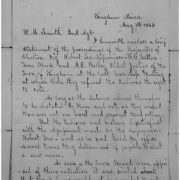 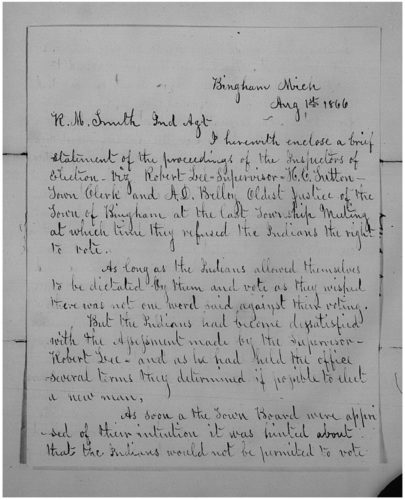 It is an election year and don’t we all know it! Mark Smith of Leland, Michigan, one of our newest members, wrote an interesting article about an early case of voter suppression experienced by Native Americans here in Leelanau in 1866.  It was published in the Leelanau Enterprise on October 8, 2020 and will soon be published in the Northern Express. Thanks to Mark for contributing this article to the archives at the Omena Historical Society. It reminds us that voting rights are still something to fight for! Mark is a retired English teacher and his main area of research is the early days of Northport and Omena. He has this to say about the article he wrote:

“A remarkable document came my way recently by way of a fellow researcher, Larry Wycoff. Larry knows my area of interest and he sent me a scan of a letter, untranscribed, from Aaron Page of Omena to the Indian Agent, Richard Smith, dated 1866. The letter concerns voter intimidation and suppression of local Indian votes through strong arm trickery. It is indicative of much larger concerns of the time.

The Native Americans were unhappy with the way their land was being assessed and allocated by Supervisor Robert Lee. Their deeds to their land were often not registered (or registered wrongly), and so their land claims were falling between bureaucratic cracks. They decided to be agents of change and to vote against Supervisor Robert Lee. You will see for yourself how that went. I would say it was an act of bravery and self-determination, and I would also say that Aaron Page, the author of the letter, was one of the good guys, at least attempting to stick up for the Indians.

And here is the Full Article:
Voter Suppression in Bingham Township, 1866

Here is a story for our times. In the late summer of 1866, “forty or fifty Indians” turned up to vote in a local election in Bingham Township. Ever since 1850, when Indians were granted state citizenship (provided they renounced any tribal affiliations), they were able to cast ballots for local and state offices. However the process of voting in 1866 was different than today. Voting then was not a private choice made in the confines of a voting booth. It was not until the turn of the century that “secret” ballots became the norm, following the Australian model. In 1896, for example, Americans in thirty-nine out of forty-five states cast secret, government-printed ballots. But in Bingham Township in 1866 voting was a public matter so everyone knew how you voted.

How did voting work then? Party activists distributed lists of names (“tickets”) of candidates to voters, hoping they would support those candidates. The tickets would be exclusively from one party, Democrat or Republican. Incumbents had a distinct advantage, using their position to make promises and threats to recalcitrant voters, knowing all the time that the actual vote would be a matter of public record. In the case of the Indians it was usually the Indian Agent, also a partisan, who provided the tickets, which were then brought to the voting booth and handed over to the voting officials. According to historian Jill Lepore “Shrewd partisans began bringing prewritten ballots to the polls, and handing them out with a coin or two. Doling out cash—the money came to be called “soap”—wasn’t illegal; it was getting out the vote.”

Why was getting out the vote so important? In 1866 when a new party came to power there was always a wholesale firing of old party officials and a reassignment of jobs to new, loyal party members. This practice, called the spoils system (or patronage system), would remain the status quo until the Pendelton Act of 1883 was enacted as part of a civil service reform movement. Today we still operate under the Pendleton Act, with civil servants mostly staying on in their posts despite election consequences, thereby ensuring a level of expertise and continuity, rather than the disruptive firings and hirings of the spoils system. So, to be clear, in 1866 there was added pressure and added incentive for party officials “get out the vote” by any means necessary in order to save their jobs.

The letter which follows was written by Aaron Page, who moved to Northport in 1854 and married Joseph Dame’s daughter, Almira. Page would later go on to become Omena’s first long-term postmaster. Here, then, is the letter from Aaron Page to Indian Agent Richard M. Smith, dated August 1st, 1866. Read closely and you will see the rather nefarious operations of the Inspectors as they attempt (and succeed) in depriving the Indians of the right to vote their choice.

I herewith enclose a brief statement of the proceedings of the Inspectors of Election, viz Robert Lee, Supervisor, H.G. Sutton, Town Clerk and A.D. Belloy, oldest justice of the town of Bingham at the last Township Meeting at which time they refused the Indians the right to vote.

As long as the Indians allowed themselves to be dictated by them and vote as they wished there was not one word said against their voting.But the Indians had become dissatisfied with the Assessment made by the Supervisor, Robert Lee, and as he had held the office several terms they determined if possible to elect a new man.

As soon as the Town Board were appraised of their intention it was hinted about that the Indians would not be permitted to vote, but on what grounds they were to be excluded was not mentioned. The Indians therefore resolved to fulfill on their part every requirement of the law that there should be no lawful reason to deter them from voting, consequently all that were not certain their names were entered on the Book of Registration went to the Town Clerk previous to the day of the Election and had them registered.

On the day of Election all Indians, numbering between forty and fifty, went to Polls together, taking an Interpreter with them. On their arrival I stated to the Town Board that as the Indians had learned they were to be excluded from the Polls they had provided themselves with an Interpreter that all might plainly understand on what grounds the Hon. Board pretended to sustain such a decision. To which they replied they were very glad that we had brought an Interpreter as they were very desirous of explaining to the Indians the reasons that had induced them to make the decision they had. They went on to say that if the Indians were permitted to vote they would lose their Annunities. The Indians replied “ we will run the risk – we have voted ten years, receiving our annuities in the meantime as usual and we are confident we shall not forfeit by exercising our rights as citizens by voting.”

The Board then said “they could not receive their votes as they were not citizens. They were receiving pay from the government and were consequently minors, besides they were not subject to the draft.” Neither did the same laws of the state prohibit their killing deer and other wild game.

It being noon the Board adjourned for dinner. The Polls were again opened at three o’clock and Peter Ance offered his vote, which was challenged by L. D. Quackenbush, and told by A. D. Belloy that his name was not on the Register. The Indian enquired how it could be that his name was not on the Register for he had voted here several times before and no one had made the least objection. The Board offered no explanation but asked him if he did not receive pay from the government. To which he replied in the affirmative, and to the question “do you belong to a Tribe” he answered No! He then offered to swear in his vote but the Board would not administer the oath nor receive his ticket. I referred them to the law on this subject where it plainly states that “if the Indian shall take the oath prescribed the Board shall receive his vote. But the Board were immovable and after two more had made ineffectual attempts to vote the Indians retired peaceably and returned home.

John B. Ance, Peter Ance, and Joseph Chippewa were the only ones who presented their tickets to the Moderator as they were repeatedly informed by the Board that they would not be received.